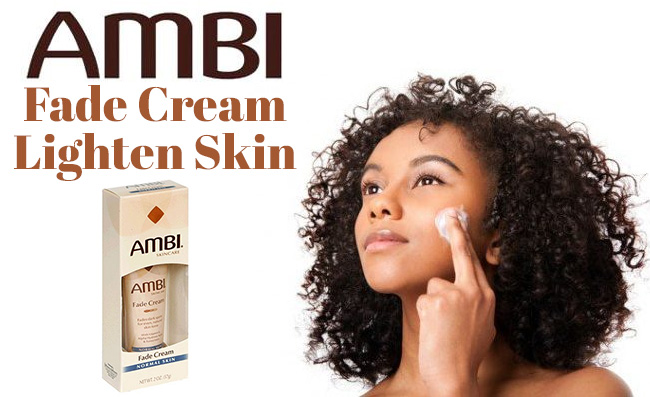 Even though the AMBI line of skin care products isn’t the most popular option out there, it doesn’t mean it doesn’t present impressive selling numbers. The manufacturer gives us a great diversity of cosmetic products, from cleansers and moisturizers, to , lotions and creams.

AMBI fade cream may be the most popular and well-known product among all and that’s because it’s an innovative topical product that aims for dark spots, while evening your skin tone too.

You may find two different versions of the product, one addressing the regular skin type and the other one matches the needs of the oily skin type. No matter which version you use, both are strong skin lighteners and the manufacturer promises obvious results in a couple of weeks of use.

A closer look at the ingredients

The cream is made to gradually fade dark areas, giving you an even, natural skin tone. It seems that it includes sun screen which protects your skin from darkening again.

The special formula of the cream addresses skin discolorations like age and liver spots, freckles, pigment in the skin that may appear after pregnancy.

Even though the main ingredient is , the cream also contains Vitamin E that softens your skin, keeping it nice and smooth. The Alpha Hydroxy Acid is going to improve the action of hydroquinone, giving better results.

Hydroquinone has been approved by the FDA for treating various skin conditions: freckles, melasma and general brown patching.

Hydroquinone is able to inhibit the activity of , the enzyme that regulate melanin production in the skin, while raising the cyxtoxicity of melanocytes (the cells that produce melanin). The efficiency of hydroquinone has been proved in time over and over again and a study in 2003 shows that it’s able to lower signs of hyperpigmentation linked to melasma by an impressive 76.9%.

It’s very true that, at the moment, hydroquinone is forbidden in Europe and some countries from Asia and Africa due to its possible connection to cancer and ochronosis (permanent darkening of the skin).

Some years ago (in 2010), FDA presented its concerns about the use of hydroquinone as a skin-bleaching agent. It became clear that new rules for over-the-counter skin bleaching drug products had to be made, since they weren’t proven to be entirely safe and efficient.

Hydroquinone has been connected with the paradoxical skin darkening that occurs if taken simultaneously with resorcinol. This one is another ingredient that is used in the skin bleaching creams.

Despite the many concerns, most dermatologists and skin care experts around the US still recommend hydroquinone for solving . The highest level of hydroquinone allowed over-the-counter (2%) is safe for use. Worst case scenario, it may lead to some irritation or redness, but this happens only if your skin is sensitive or if you have allergies to the ingredients in the cream.

The whole fuss about of hydroquinone started some years ago when an early study proved that mice exposed to hydroquinone ended up with liver tumors. However, it seems that the entire results were presented in a misleading way in the first place.

Truth be told, hydroquinone raised the number of benign liver tumors, while minimizing the proportion of cancerous liver tumors in the mice, thus proving its protective effect. It has also been stated that kidney tumors linked to hydroquinone in mice doesn’t seem to be relevant to humans after decades of use. Therefore, topically-applied treatments with hydroquinone are safe.

We now know about more than 100 scientific articles that prove that hydroquinone is a safe topical for humans and there’s not independent study so far to prove otherwise.

What to expect when using the Ambi fade cream

If you’re patient and dedicated, you should expect for the cream to improve the signs of hyperpigmentation (age spots and uneven pigmentation) after 6 weeks of use. The Ambi Fade cream also contains soy protein and lactic acid, which are known for the milder effect on hyperpigmentation.

The manufacturer also claims the cream includes “sunscreen”, but we’re not putting our faith in it as there is no SPF listed on the package. This may only mean that the cream doesn’t give enough UV coverage so that you may use it entirely as a sunscreen.

Ambi fade cream does contain 2% octinoxate, which breaks down if other sunscreen is used (as long as it’s including avobenzone).

So, does Ambi fade cream whitens your skin? Yes, it does, but it has nothing to do when it comes to protecting you against sun’s bad UV and UVBs.

The formula of Ambi fade cream is quite strong which is why it lightens and dark spots on your skin. The combination of the strong ingredients gives great results if you’re using it on regular basics.

It seems that the cream has a triple action system formulation that explains the obvious results in case of regular and safe use.

Even though some felt the cream has a strong, metal scent, the scent does fade away quickly. The cream is easy to use and doesn’t clump on your skin either.

It gives no irritations, even if your skin is sensitive, and works on an acne prone skin as well.

The cream is going to reduce dark spots, wrinkles, and fault lines and it also leaves your skin glowing and softer.

A little goes a long way and the cream will get you covered for a couple of months, with regular use.

Let’s list down the main good things about the cream:

Bells and whistles aside, we do have some observations to list:

Despite the fact that Ambi Fade cream isn’t clinically proven that whitens the skin, most of its consumers out there experienced whiter skin after using it for a couple of weeks.

Ambi Fade Cream evens your skin, minimizes freckles, sunspots and various skin spots that are connected to the darkening of your skin. For the money you’re paying though, don’t expect the changes to be dramatic nor to happen overnight!

===> See the reviews and pricing on Amazon