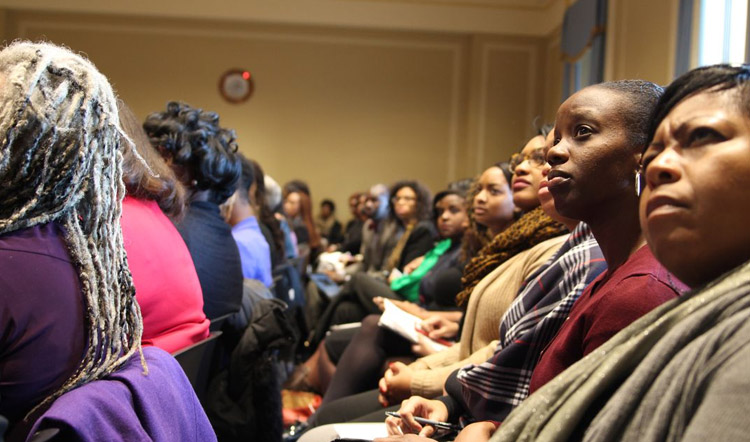 The 2018 Essence Festival got together some of the most inspiring and strong Black women in position of influence and leadership. One of the main goals was to make sure that everyone attending the meeting was very well aware of the importance of the mid-term elections.

It was congresswoman Donna Brazile on Thursday evening who got all the things started with the “Black Women’s Empowerment” cocktail reception. The event focused mainly on the dozens of black women running for office in 2018. Several important names from the civil rights and political areas spread, briefly and yet affirmative, their thoughts on the power of Black women’s vote, spicing up the atmosphere.

Latoia Jones, representing Power Rising organization was pretty clear: “We are here from the north, from the south, from the east and from west to reclaim our time, “.”To unite in and proclaim that America is already great because we as Black women have made America great”, she continued, firmly.

The weekend’s festivities got a special vibe thanks to New Orleans Mayor La Toya Cantrell. She got on stage at Ernest N. Morial Convention Center on Day 1 of the Festival, sending her very warm welcome to the crowd, in the name of the city. As the first Black woman mayor of NOLA, Cantrell made quite an impact by simply showing up. However, that wasn’t the only moment that counted for the goals of the event.  However, there were so many other moments that revealed the high importance of the voting rights this November

Cantrell was very honest and appreciated everyone’s presence: “Thank you so much for your continued support of the ESSENCE Festival”. Each of her words has a place and a power of its own: “As you know, it has never been about a party. Although that’s a part of it, it’s always been about a party with a purpose. So, I want to say thank you to our ESSENCE family. This is our 24th annual ESSENCE Festival and New Orleans is always the best host possible and we want to make sure that we continue this strong, strong partnership. To all of you, who have taken the time, dug into your pockets to make this trip possible for you and your families, thank you so much. Because this is how we connect as people, as African-Americans, as women strong and empowered. We need to continue to not only elevate, but to ensure that all of our people can reach their full potential, where we live, of course, in our city, but also throughout our country. We have a responsibility to do that.”

Trayvon Martin’s parents Sybrina Fulton and Tracy Martin sat down in the Entertainment All Access screening room, after running the episode 1 of their powerful six-part docuseries Rest in Power: The Trayvon Martin Story.

Everyone involved in the conversation, Fulton, Martin and the series’s co-producers really pointed out to the audience the amazing impact of their anger and outrage, as long as their using their voices at the polls. That’s the real change that they can bring to the criminal justice system.

Apryl Ryan, Symone Sanders, Tarana Burke and Luvvie Ajayi ended the Day 1 in the Convention Center, leaving everyone in the audience with one important panel on the Empowerment Stage “I’m Woke. Now What?”. It was Yolanda Sangweni, the Essence Digital Director, who led the conversation, allowing each lady to speak out about how people can actually put their words into action, fighting for the social justice in the right way. The conversation wasn’t the only one to highlight the importance of the communities for going to the polls, in order to strengthen their voices beyond social media, in the most effective way possible.

Day 2 of the Festival’s daytime activities brought us multiple discussions about Black communities and Black women voting. Maxine Waters (congresswoman) and Angele Rye (political analyst) put a light over the big role of Black women in today’s political landscape. Additionally, they highlighted during the opening conversation the significance of all the work ahead as we get closer to the mid-term elections.

It was later in the Saturday afternoon when Sybrina Fulton talked about her message of change, thanks to the Empowerment Stage and Patrisse Cullors (co-founder of Black Lives Matter). Pointing out the 5th anniversary of the Black Lives Matter movement and the 6th celebration of Trayvon Martin’s death, the two strong figures also talked about where we’re sitting now when it comes to fighting gun violence within the communities and how we should value more the Black Lives.

The panel led by LaToya Cantrell (New Orleans Mayor), Keisha Lance Bottoms (Atlanta Mayor), Vi Lyles (Charlotte Mayor), and Karen Freeman-Wilson (Gary Indiana Mayor) stood out as the most dynamic one, as the conversation was mostly about the power of the Black Women’s vote and political voice. The discussion was honest and true and each of the four women talked about their ideas and plans about getting the best out of their political platforms. They sure seemed determined to improve everything about the predominantly Black communities they speak for and make everyone aware of their voices.

Ready to bring a change in the history, the leaders made sure that everyone in the audience is going to exercise their voting rights in November. They talked about how the election results are going to reflect on the practical initiatives, from the education reform, ties to the affordable housing, to the criminal justice reform and better and easier access to mental health and health care services.

The festival was a complete success and no less than 500,000 people took part at the event. Additionally, everyone in the audience had the possibility to download the official 2018 Essence Festival app and to register and vote with one simple click of a button.

4 Top Reasons to Get 8 Hours of Sleep

How to Manage Fatigue While Working (Fatigue Management)

What is the Best Material For Bedding

4 Skincare Myths That People Assume to be Right