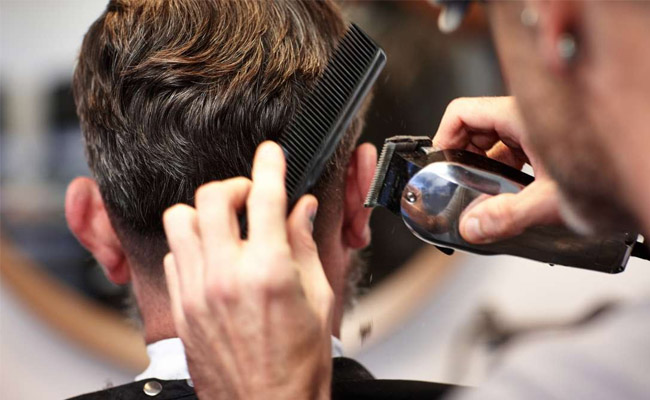 Home » Hair Cutting » How to Blend Hair with Clippers

You only need some basic info on cutting, a bit about the clippers and the clipper guard numbers. You should learn also about the hairstyle that you’re aiming for. Some trimming is essential for a good haircut, so it’s best to also learn about how to do it and how to take care of your clippers.

The basics on clippers

There is a great diversity of shapes, sizes and motor strengths when it comes to clippers and most of them come with a complete set of guards. The guards slip over the teeth of the clippers and don’t allow you to take too much of the hair.

The guards are in one eight inch increments. Most of the models out there come with an arm on the side that lets the teeth to be extended out, which adds one sixteenth of an inch long. Therefore, a #4 guard is going to become a #4 and a half when extended.

It’s important to know about the “numbers” in clippers as they’re related to the blade guards, which determine the final length of your hair.

The smaller the number, the shorter the cut. A #0 guard is going to give you almost no hair, while a #8 guard means 1 inch.

For best results, it’s important that the hair is nice and clean so you need to wash it. A clean hair is easier to comb and doesn’t have extra waves or bends either. In case your hair is sensitive like that (or the person’s hair is like that), you should use some de-tangler.

As for how the hair should be when cutting, the debate is still out there. Some cut it wet, some do it almost dry, so it’s a matter of how you’re feeling the hair during cutting.

The ideal situation is to quickly go in the shower after getting a haircut. In most cases though, this isn’t possible. Therefore, you should use a slick fabric to cover the shoulders so that all the hair falls off onto the floor, instead of messing the clothes.

As cutting hair is always messy, it’s better to do it outside or in a garage. If none of these solutions work for you, try to find an easy-to-clean area. Bathrooms and kitchens are the most common choice.

There are some tips when you’re using the clippers, so keep them in mind for getting better results.

In case you’re going to have to remove a lot of hair, you should start with blade guard for the longest length you want. You’re going to buzz it all over the head like this, going back and cutting the parts shorter afterwards. You should do it like this only when you have to get rid of lot of hair.

As from the starting point, the ball is in your court too. Some like to start on the back and move from one side to the other. But this doesn’t mean you can’t start from the top. No matter where you’re starting, it’s always best to check so you don’t skip any parts.

This kind of move is essential, especially when you’re blending the hair. You need to start by moving in close to the skin. As you go up, scoop gently and slowly outwards, just a little bit. You should use the short scooping strokes on the whole head so that you get the soft cuts that you want.

When you’re using several blades on a cut, you notice that there are some lines between the shorter and the longer length. Fading those lines is fundamental for a nice cut, so you should use a blade guard between the other blade guards. Therefore, if you used a #4 for the top and a #2 for the sides, you should also switch to a #3. Simply go along the line, smoothing out the border between the two sections.

Most haircuts out there do imply some blending at some point. Even if the haircut begins very short at he bottoms near the nape and around the ears, it’s going to become longer as you move up towards the top of the head. And this does include blending, for sure.

You should always follow the shape of the head and move inwards, above the widest areas so that you get a rounded shape, also known as a crew cut. The moment you blended the cut as you wanted, you may use the clippers over comb method to take care of the top. If you’re up to it, you may very well use the shears.

The clippers over comb method

You may also use this method for blending, as opposed to using guards. You should pay attention when using this method as the clipper is wider than the comb and you may leave a line the hair if you’re not careful enough.

When using this method, you may simply comb the hair out a parallel line to the head, run the clippers all the way of the comb and cut the hair even with the comb, at the length that you wanted.

Many cut the hair with clippers when the hair is dry. Nevertheless, you may find clippers that work the best on wet hair. Wet hair lays down when the clippers go over them, and don’t go into the teeth for a neater cut.