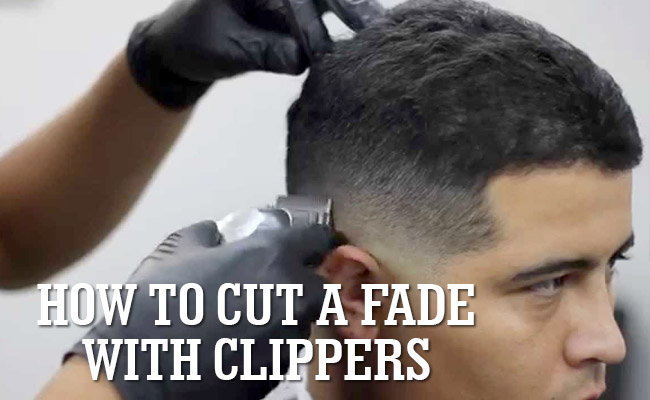 Home » Hair Cutting » How to Cut a Fade with Clippers

The fade cut isn’t just popular, but also flattering to many and it refers to the hair cut short near the neck, gradually getting longer near the top of the head.

You may choose various types of fade on your cut and you only need some clippers and a pair of barber scissors to create the fade haircut.

Here are some things to keep in mind if you’re planning to cut a fade with clippers any time soon.

Fade haircuts are short, most of the time, and some are even buzzed, near the nape of your neck. The hair gets gradually longer on the back and sides of your head and the longest hair is going to be at the top of the head.

A fade relates about any kind of gradual transition from short to long hair, so making an idea about the shortest part and the longest one too is essential before actually cutting the hair.

Just to give you some options, here’s a bit about some of the most popular fade haircut styles that you may try:

This kind of haircut is an inch or two long on top, whereas the gradual fade to the shorter length happens on the back and on the sides

The Caesar fade is in fact very short in the back and on the sides, going a bit longer on top. The hair on top is typically combed forward and not parted and the shorter bangs are swept to the side most of the time.

This type of fade cut is an inch or two long on top, whereas the gradual fade to a shorter length is found on the back and on the sides.

This one is a lot like Princeton fade cute, but the fade is a bit sharper. The top is way longer, whereas the back and the sides are either shaved or buzzed.

We are all different and we may like our hair to start fading from longer to shorter from different parts. Typically, the fade begins at the ears, getting shorter down to your neck. This type of fading at the ears matches most head shapes, but you may also consider other factors when deciding where the fade should start:

Tips for the short fade

if you think you’re up for the task, you may try using clippers to get a close cut, but you should know that is a lot easier with the scissors.

You need to use a different guard setting for each of the lengths: no.3 for the top, no.2 for the sides and no.1 for the neck areas. This way you’re going to be able to create a high and tight, or any other short haircut style. Many call this method the 1-2-3 method and here are steps to follow:

Set your clippers to the #3 guard length and buzz the whole head, going over the sides, back and top too. You need each zone of your hair to have a uniform length. Keep in mind to work against the grain of your hair in order to obtain an even cut.

Start in the back of your hair and cut the hair in vertical strokes, from the neck toward the crown. You should only stop just short of the crown as you want the hair on the top of your head to stay long.

As you go closer to the crown with each stroke, try to pull back a bid so that the hair lengths are constantly fading together. Do it on the sides of your head too, pulling back at the same height around your head.

Make sure to blend all the uneven lines as you back over them with the #2 guard.

You should begin at the nape of your neck and work toward the middle of your back of the head, using upward strokes. Pull back a bit so that you easily blend the shorter hair with the longer one. Go around the head and pull back at the same height in all areas.

Remember to take a look at the fade cut. In case you find any uneven spots, too long or too short, it’s better to go back over them with the right clipper guard. Don’t forget to shave the hair from the neck so that you give the neat edge at the bottom of the hairline.

Tips for the long fade

If you’re aiming for a long fade, here are some things to keep in mind:

Some fade cuts are a bit more sophisticated (Caesar and Princeton are good examples), so you need to use more than just one tool. Even though the principle is the same (longer on top, shorter on the back and the sides), the method to get to that longer fade look is entirely different.

You may start by wetting the hair, as it’s going to be easier for you to work with. Anyone getting a long fade cut should shampoo the hair and pat it dry with a towel before the haircut actually begins.

In this type of fade cut, you should start by trimming the bottom of the hair, at the nape of the neck and moving upward. Lift the sections of the hair between your forefinger and middle finger, using a comb. Your fingers have to be aligned vertically with the head. Trim with scissors the portion of the hair coming out from between your fingers. Gather small sections of hair and trim them to the same length until the back of your hair is trimmed from the nape of the neck to right below the ears.

In case he/she getting the fade cut, wants buzzed hair at the bottom of the fade, you should use the #3 guard on the clippers for trimming the hair from the nape of the neck to below the ears and the line between them, all around the back of the head. The strokes should be upward and you should gradually pull back just before you get to the ear line.

Use the same method that you used for gathering section of the hair between the fingers. Cut the hair coming out from them, working around the sides of the head and the zone above the ear line, on the back of the head. You need to side the fingers away from the head so that not much hair comes out.

It’s also important to angle the scissors smoothly, as they go after the slant of the head. If you’re pointing the tips of the scissors toward the head and not slightly away is going to give a choppy looking cut.

Take a look at the hair when you’re done with the second part of the fade. It’s supposed to be shorter around the neck and up to the ear line and a bit longer right above the ear line and below the crown. Try to fix any spots that have a choppy appearance and trim carefully the sections of hair using scissors. The scissors should always angle to follow the slant of the head.

Take a look at the fade from the crown area to the back of the head. If the fade isn’t very smooth, use the scissors to make it even. Always hold your fingers vertically and not horizontally, so that you minimize risk for a staircase effect.

Pay attention to the front of the hair as you want the bangs to be trimmed to the right length. Be patients and trim the bangs and sideburns as neatly as you can.

You’re almost done, but you need to comb the hair first. Have the person check out the sides and the back so that he/she decide if he/she’s happy or not with the fade cut.

If you’re working on a picky client, you may have to wet the hair once again and use the scissors to even the hair out in the areas where it looks rather choppy.